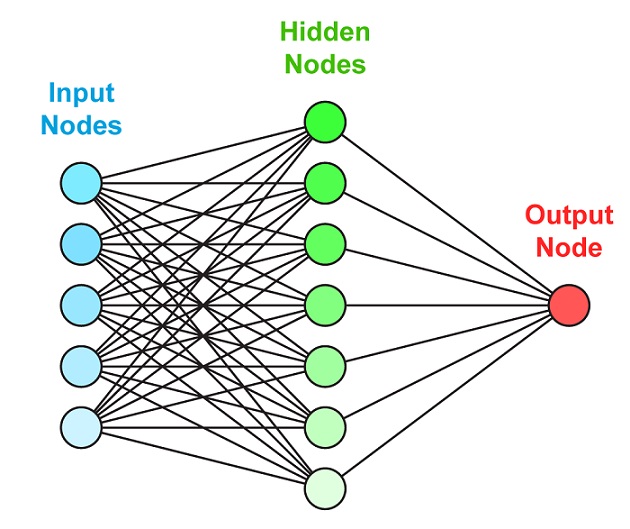 Artificial Neural Network (ANN) are powerful tools and mathematical models used for pattern recognition and modeling. ANN behave in a similar fashion as that of the biological neurons found in nature. They are usually referred to as Neural Network and are used for classification, prediction, and clustering. NN consists for numerous formulations the study focuses on two formulation the multilayered perceptron (MLP) and radial basis function (RBF).

multilayered perceptron (MLP)
MLP is feed forward neural network (Fig.1) that is trained by the back propagation algorithm.
It consists of several layers of computing units or neurons. Each unit or neuron belongs to the neural network that has a non-linear activation function. MLP contains one or more hidden layer these layers are: input layer, hidden layer, and output layer. MLP networks are supervised techniques, they learns from the input data as to how to transform to desired response. Inputs for each layer are the previous layer inputs multiplied by the activation synaptic weights, summed and transformed by the activation function. These outputs are then sent to the next hidden layer.

RBF networks are non-linear and have a static bell shaped function. In this case, the activation of a hidden neuron or layer is based on the distance between the input vector and the center vector.
It consists of input layer, hidden layer where there is a non-linear transformation from the input space to the hidden space and the output layer that generates the output for the network. In case of RBF divides the space into hyperspheres instead of using hyperplanes as in MLP. Thus, in this case the inputs are used to determine the basis function, which is followed by the finding weights of the parameters found from the inputs. MLP minimizes the sum of squares of errors, which is also used in RBF.

The advantages of using ANN is they usually perform better than the other models due to their complex structures. They are not sensitive to unusual values (outliers) in the data and thus provide better performance.

The disadvantages of using ANN can be lack of clarity, because the network generated is not always easy to interpret. Since ANN are not capable of selecting inputs by themselves, they would use all the inputs present in the initial data. Sometimes due to large number of variables the ANN algorithm would not converge, so for the algorithm to converge ANN is used in combination with Logistic regression. Logistic regression in this case selects input variables for ANN algorithm and uses them for further analysis.