Overall, LARC methods are seen as the preferred contraceptive for the adolescent population by providers, but are not yet the method of choice among patients. Providers and patients agree that the “forgettable” nature of this method of contraception is an important advantage and that possibility of painful insertion and removal is a major disadvantage (Figure 1) (Kavanaugh, Frohwirth, et al., 2013). However, providers do not tend to share the patient’s chief concern, having a foreign object in her body, which may be a major barrier to adolescent uptake of LARCs (Kavanaugh, Frohwirth, et al., 2013). LARC’s may help to lessen the female’s burden of responsibility of contraception, as many women feel that this responsibility is not shared by their partner (Hodgson, Collier,Hayes, Curry, & Fraenkel, 2013). 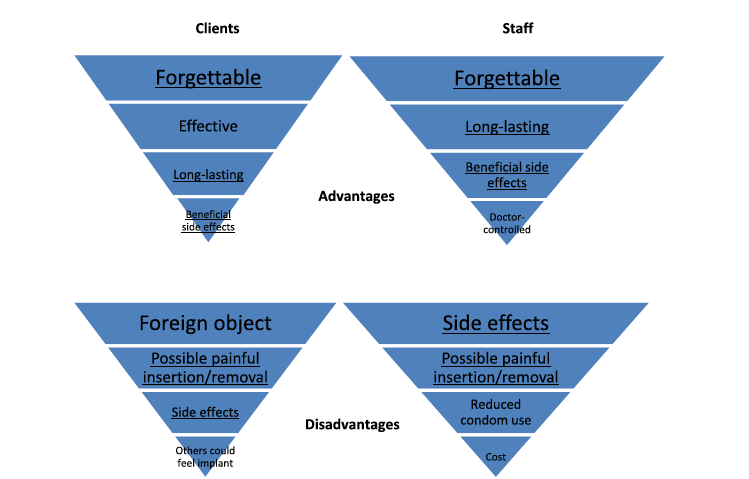 History of LARC and Women of Color

Though all major physician professional groups have issued resolutions in support of LARC use in adolescents, we should proceed with awareness of the history of one form of LARC, Norplant®, in communities of color. In the early 1990’s, Norplant®, the six-rod original formulation of the sub-dermal implant, was suggested by American political groups as a method for sterilizing women on Welfare (Thompson, 1996; Roberts, 1998). Allegations of providers refusing LARC removal have also surfaced, as have assertions of providers specifically administering the device to women with “social problems” (Thompson, 1996). Indeed, Black and Native American women have historically used Norplant® at rates much higher than their White and Asian counterparts (Malat, 2000). In administering LARCs, providers should take care to preserve female autonomy and ensure that removal is readily available when desired by the patient.