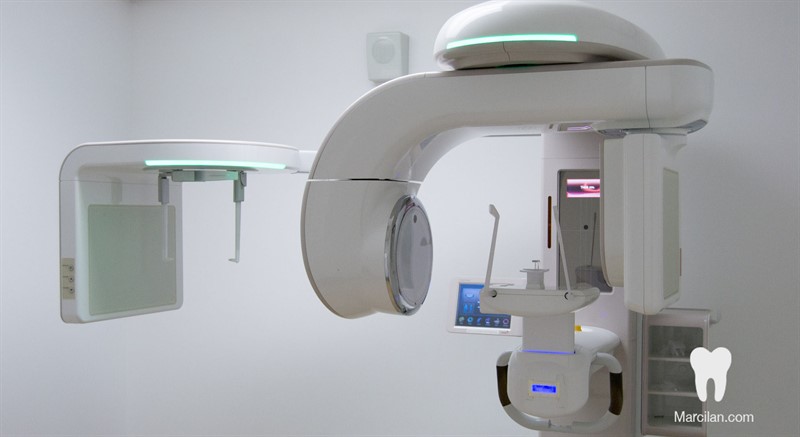 Extensive literature has now been published on the anatomical accuracy of CBCT. Prior to initiating any experiment designed to question the perceptual-cognitive abilities of endodontists, the dimensional accuracy of a digital technology must first be established. If CBCT reconstruction images prove to be dimensionally inaccurate, then the interpretation will be immensely hindered and all perceptual studies will be inherently flawed. In order to establish a gold standard of dimensional reproducibility, many in-vitro studies were conducted. Suomalainen used cadaver mandibles to measure set reference points on CBCT software and micro-CT software, and then compared them to the gold standard of sectioning and physically measuring the mandibles. All set reference points were almost identical, and became more accurate with greater doses of radiation. They found that the CBCT software was able to measure set reference points more accurately than even the micro-CT, although there was not a statistically significant difference. Kim et al showed similar results as Suomalainen, and also investigated the ability of a CBCT scan to accurately locate the inferior alveolar canal and measure the distance separating the canal from the apices of the posterior teeth. Five cadaver mandibles with soft tissue still intact were scanned by a CBCT at 200 micron sections and measurements were obtained by two examiners.

The inferior alveolar canal was then exposed and the distance was histologically measured. There was no significant difference between anatomic and CBCT measurement methods and all CBCT scans clearly showed the anatomical presence and location of the canal. With a CBCT image that directly reflects the anatomical position and size of the canal, it should greatly increase the clinician’s ability to properly plan for
posterior surgery and aid in patient education for potential risks or complications associated with their canal system and anatomy. Velvart et al expanded on these findings in a clinical setting. Fifty patients that presented for mandibular posterior apical surgery were imaged pre-operatively with CT scans at a 1 mm voxel size and conventional periapical images. Using the surgery as the gold standard, all periapical lesions presented as findings on the CT. In contrast, only 78% of clinical lesions presented as radiographic findings in pre-operative periapical images. Multiple mandibular molars presented on periapical radiographs to have a finding on only one root. Upon further investigation with the CT image, a secondary finding was located and the treatment plan was adjusted to include the secondary finding. The mandibular canal could be located in 62% of pericapical images, whereas all CT scans showed the presence and location of the canal.

The distance between the canal and the root apices could not be measured accurately with periapical images, but was measurable in all CT scans. Even in the limited 1 mm voxel scans, the CT proved to be an important adjunct to surgical endodontics. The importance of these studies reflects the ability of the CT to display anatomical relationships, both normal and abnormal. Although previous studies demonstrate the accuracy of CBCT in measuring between reference points in the mandible that are relatively distant, endodontics requires accuracy over very small distances such as a periapical finding. Kamburoglu used cadaver mandibles to chemically create periapical lesions for CBCT evaluation. Radiologists measured the distances of the created findings multiple times and they were compared to the gold standard of a precise digital caliper. There was no significant difference in the intraobserver or inter-observer measurements, and the CBCT was accurate to within .0625 mm which was not significant. The importance of this study is two fold. First, the CBCT software gives the capability to consistently reproduce the measurements of a periapical finding, whether that is between separate clinicians or the same clinician on multiple readings. Second, the CBCT measurements can be consistently compared to actual in-vitro measurements in small periapical findings. This is significant because the larger the distance in question, the easier it is to be accurate without statistical difference. If the measurement was only a few microns, it would be almost impossible to be consistently accurate. In this study they showed that artificially created periapical lesions ranging from 1.5-3.0 mm can be consistently and accurately measured with CBCT software. The measurement at these dimensions more clearly represents typical endodontic pathology compared to previous studies measuring set reference points of longer distances. Other methods have been described to compare in-vitro CBCT accuracy to a gold standard. For example, CBCT scans have been compared to micro-CT imaging to estimate the volume of a developing tooth germ. Maret et al used 16 adolescent cadaver mandibles to compare the accuracy of the CBCT to the micro-CT for tooth germ size. Here the CBCT showed very similar volume measurements to the micro-CT, and the threedimensional reconstruction had no significant geometric deviations.

Since the CBCT imaging modality proved to have no significant measurement differences from the micro- CT in adolescent mandibles, but does have reduced radiation exposure, it should serve as an excellent clinical imaging alternative for children. This study also showed that CBCT is comparable to the micro-CT not only in direct linear measurements, but also in volume estimation. Although other studies had proven the CBCT accurate in measuring set reference points or the diameter of a lesion, the next step was to investigate the accuracy of the estimated periapical finding volume. Esposito et al used bovine mandibles and created bur defects of different shapes and sizes to represent a wide variety of endodontic pathology. CBCT measurements were used to calculate the volume of the lesion and compare itagainst the gold standard of a light-body vinyl polydimethylsiloxane impression material. The impression material was weighed and the volume was established using the knowndensity of the set material. The intra and inter-observer measurements showed nostatistically significant differences reinforcing the software’s measurement reproducibility.The results showed a good fit and strong correlation between impression volume measurements and CBCT volume measurements. This clearly advances the clinician’s ability to accurately estimate a periapical finding of endodontic origin. Even though knowing the diameter of the lesion is a helpful tool, when the volume can be accurately reproduced the clinician has a better understanding of the complexity of the pathology. Ahlowalia confirmed these results in a similarly designed study. Using bovine rib bones with all soft tissue removed, a 3 mm round bur was used to create 10 varying artificial lesions. They compared the impression material to the CBCT volume measurements and to a micro-CT scan. Intraexaminer interclass correlation coefficient was .99 showing reproducible results and the intraclass correlation coefficient was .98 showing almost identical results between the CBCT, the micro-CT, and the impression material. Although there are differences between bovine and human bone density and the study was done without any attached soft tissue, the results still reinforce the reproducibility and accuracy of the CBCT compared to the micro-CT scan and physical impressions. In a clinical setting these volume measurements could be used at recall appointments to compare pre-operative finding size to a healed or healing finding.

Kaya et al did exactly that on 16 patients receiving endodontic therapy. Pre-operative CBCT scans were evaluated for bone density and finding volume and then compared to a postoperative recall CBCT scan that was made two years after treatment. They showed a significant difference in bone density between the two scans, and concluded that CBCT can be used as a reliable indicator of endodontic radiographic healing. Unfortunately, there was no comparison to another radiographic technique, such as conventional periapical radiography or to a gold standard histologically. Simply stating that there is a difference does not strengthen the argument to routinely take CBCT scans on post-operative recalls. For many years in endodontics, a conventional periapical radiograph was used on recalls to monitor for radiographic healing. In order to justify the higher radiation exposure to a patient there must be a significant difference between the CBCT scans and conventional imaging. The difficulty arises when correlating radiographic findings with the actual presence of clinically important apical periodontitis. CBCT scans are likely to enable the clinician to see more anatomical detail than a conventional periapical image. This magnified detail in imaging could possibly lead to higher sensitivity in diagnosing apical periodontitis, but it may also give more false positives, or a type I error. Both the sensitivity and specificity of a test rest on the true prevalence of a disease. If the presence of apical periodontitis following root canal treatment is actually histologically high, then conventional methods of periapical imaging have identified a large amount of false negative results.

This is far from clinically accurate. It may seem that in order to evaluate the difference between imaging methods in detecting apical periodontitis, the study must have a high number of cases with apical periodontitis, whereas the opposite is true. By designing a study with a high prevalence of disease, it sets up the tests to have a biased sensitivity and specificity result. These results would be more reliable if the presence of apical periodontitis in all teeth throughout the actual population was very high. Secondly, all teeth examined for apical periodontitis were root canal treated in the study. The study points out that the observer was blinded to the treatment groups, but root canal treatment is clearly visible on both CBCT and periapical imaging modalities. If an observer knows a tooth has had previous root canal treatment and is searching for apical periodontitis, there is little to no downside to stating every tooth has a radiographic finding. In combination with the extremely high prevalence, if the observer stated there was only one negative case, the results would have been more accurate. Even rife with problems, de Paula-Silva et al begins to lead endodontics into another realm of treatment planning and diagnosis. If previous studies relied on periapical imaging alone to determine success, it is very likely apical periodontitis is readily under diagnosed. With CBCT imaging becoming more frequently used in endodontics combined with the higher sensitivity rate, it is probable that more teeth will be radiographically categorized as displaying signs of apical periodontitis. What effect this will have on clinical decision making is yet to be seen. What is clear from the existing literature is the accuracy of CBCT technology. The software enables the clinician to accurately reproduce set reference points, measure dimensions of anatomical structures such as the mandibular canal, and even measure the volume of periapical pathology with precision. Studies also indicate that the measurements can be easily reproduced by the same observer or multiple observers maintaining dimensional consistency. Now that the accuracy and consistency of CBCT technology is established, it is important to shift the attention to actual clinical uses and limitations of the software.