What is Fog Computing

What is Fog Computing

Fog is a system-level horizontal architecture that distributes resources and services of computing, storage, control and networking anywhere along the cloud-tothing continuum [Chiang et al. 2016]. In essence the fog is a middle man aimed at managing the constrained resources across a larger pool of otherwise unused devices, as an effort to accelerate the speed at which decisions can be made accurately. 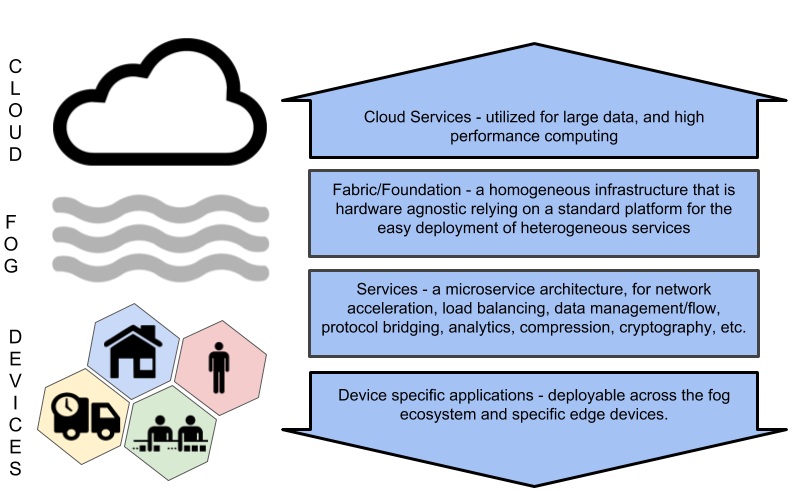 Figure 1: This is a general breakdown showing where services are performed in the path from device to cloud. Devices in IoT-driven communities with limited functionality, computational power and resources are specific in function. Moving through the continuum to the top we approach fog, which serves as the foundation for services to be incorporated between cloud and devices, but physically closer to the user than the cloud. They also provide the closest functionality to that of a cloud, but do not have nearly as much processing power on board.

This fog-centric architecture addresses a specific subset of challenges in bandwidth, latency and communication challenges associated with the next generation of networks. The aim is to construct a local intelligence away from the cloud servers and close to the edge devices in IoT environments. The fog works in conjunction with both IoT devices and the cloud by combining the use of low-latency storage devices, computational power not available to constrained edge devices, low-latency local communication. All in conjunction with wide area communication, management for network measurements controls and configurations nearest the end user. In its simplest form, the fog moves the cloud closer to the user. The conjugation of these fog features mitigates the effects of wide area network latency and jitter concerns caused by traffic congestion proves costly to time sensitive tasks, frequently involving medical devices, cyber-physical systems, and industrial equipment. In such contexts, uninterrupted service is key, while connectivity to the cloud is bound to be intermittent . By providing uninterrupted service along with prioritized service we can create several key features that were not feasible before the integration of fog. The fog provides four key features at a critical time in the growth and acceptance of the internet of things. While being ever mindful of security threats it strives to allow us the ability to make meaning from previously unstructured junk data collected and streamed to the cloud:
● The first feature is cognition. Since the fog device is more closely connected to its local network, it can determine where to carry out computational, storage, and networking tasks. Fog devices are built to be aware of the primary end users

● The second feature is efficiency. Fog can orchestrate the dynamic pooling of resources from previously unused end user devices. These resources can include computational power, low-latency storage, and control functions currently spread across the cloud to thing continuum. This would allow applications to make use of idle user owned edge devices, such as phones, tablets, tvs, and more. Note that this continuum is just that, a smooth gradient of devices types. Figure 1 provides a more detailed explanation of this continuum.

● The third feature is agility. This allows developing the technology and integrating it into the systems created by manufacturers, product developers, and the like, to affordably scale with their needs under a common infrastructure thereby helping to propel rapid innovation. This can come in at the angle of testing and experimentation for advanced systems and quickly pivot towards implementing the application. The motivation for this goes hand and hand with openness, provided by the use of open standards. The openness allows developers to work together creating a collection of diverse applications, where individuals may develop standard application interfaces (APIs) and open software development kits (SDKs) to manage the proliferation of new devices into the continuum. This flow for innovation would follow the model of develop, deploy and then operate, all within the open fog system.

● The fourth (and perhaps the most critical) feature is latency. The fog provides a feasible way for complex systems to return near real-time feedback. This feedback provides processing and cyber-physical system control to the end user/device. This enables data networks to develop more intelligence from analytics of network edge data. It can provide this intelligence in time-sensitive situations with the potential to save thousands of dollars in areas like nuclear reactors and lives in the area of advanced medical devices. Reduced latency can enable embedded artificial intelligence (AI) applications to react in milliseconds, unnoticable by humans, but providing more time for critical tasks such improving localized cyber security checks.