Despite our growing environmental consciousness, private vehicle use is on the rise. In 2009, the transportation sector was the second largest source of green house gas emissions, accounting for 28% of Canada’s total 690 mega tonnes of carbon dioxide equivalent emissions .
The vehicle has been the most influential factor in the development of the urban landscape since the 1950’s. As a result, it has become almost impossible for people to navigate without a car.There have been attempts to reduce vehicle use through carpooling programs and implementation of High Occupancy Vehicle (HOV) lanes; however, carsharing provides an alternative that allows people the freedom of vehicle ownership, while at the same time, integrating economic, social and environmental benefits. The grassroots movement has played an integral role in providing environmental solutions that work towards community sustainability. is one of these initiatives that have grown in Canada over the last 20 years  . Carsharing is an emerging industry with little history when it comes to operating in rural areas. the research methodology will be a case study of Kootenay Carshare Cooperative, from now on referred to as KCC. KCC is a unique model as it operates six branches that serve populations between 1,000-10,000 people and densities as low as 59.5 people per square kilometer compared to an urban-based carshare like Vancouver’s Modo that has densities of about 5,249 people per square kilometer . The branches in Nelson, Revelstoke and Kaslo typically break even or provide a profit to the overall cooperative, while others including Kimberly, Fernie and Rossland, continue to struggle to meet their monthly usage requirements. The purpose of this research paper is to examine the social factors in these communities in order to understand why some are successful and some are not in an effort to strengthen the existing branches, provide guidance for opening future branches and provide a resources for other rural communities in Canada

Carsharing is method of vehicle ownership where a business or entity holds the title of the vehicle and its customers are able to book them for varying lengths of time. Carsharing is different from a car rental agency in that customers can book for short tim increments in some cases as low as 15 minutes, they are not profit entities, and they are membership based. Members can book the vehicles either on line or by phone that are located throughout the service area, once they are set up as a member they are selfsufficient
in accessing the vehicles.There are now several models of carsharing including the traditional, one-way carsharing and peer to peer. In the traditional model, vehicles have a designated location and must be returned to that location. Bookings are managed on a calendar basis and customers can reserve in advance or at the time of use if a vehicles is available. Customers are billed out for the time and/or kilometers that they use. In one-way carsharing vehicles can be used from one area to another and not returned. Long distance trips are not offered by this service and it has only been implemented in large urban centers. Many vehicles need to be launched at once to make this an effective service. Peer to peer carsharing involves personally owned vehicles being shared, a way to rent out your own car in order to offset the costs of vehicle ownership. This model has had limited success due to uncertain and fragmented public policy and car insurance regimes that threatened the growth and investment in this model.

The current modern carsharing model that we see in Canada today began in 1987 in Switzerland followed by Germany in 1988. Canada launched its first carshare in 1994 with Quebec’s Commuauto followed by the Vancouver Auto Network (now known at Modo) in 1995 that was the first English speaking carshare in the world . These carsharing organizations (CSO) continue to be the largest operators in Canada with approximately 1300 and 325 vehicles respectively .

Who is KCC in the world of carsharing

Of the carsharing organizations in Canada, 85% of these are located in large cities including Toronto, Ottawa, Calgary, Vancouver and Montreal . To date, KCC offers carsharing to the smallest communities and densities in North America. KCC services six municipalities with populations ranging from 1,000-10,000 that are depicted in Figure 1. The Kootenay Region covers approximately 7.6 million hectares of the southeast corner of British Columbia and has mountainous terrain. The region extends from the Arrow Lakes country in the west to the Alberta Provincial Boundary in the east, and from the United States International Boundary in the south to Kinbasket Lake in the north . Two lane highways wind through the valleys that link communities. KCC is considered to be the leader in rural carsharing in North America and has assisted communities in South America, Australia, United States and Canada to start their own carsharing operation. 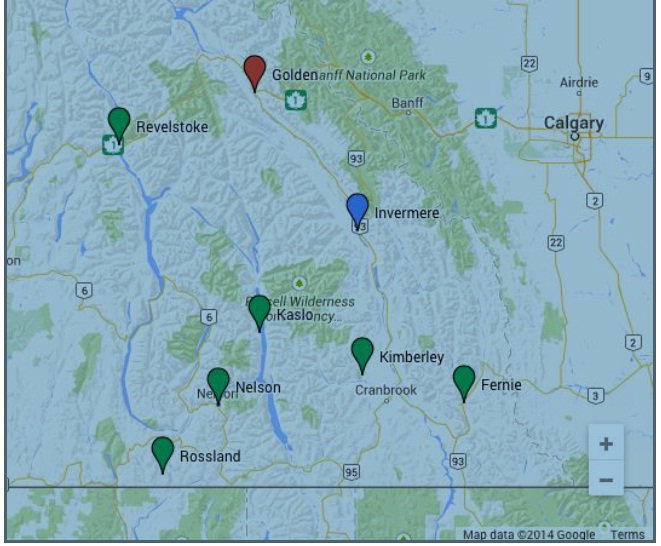