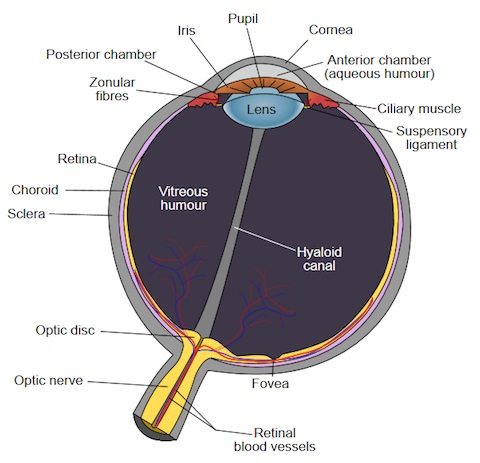 Bilaterally located on either side of the nose, the human eye(s), also referred to as the globe(s), is a vital organ necessary in visual processing. The human globe is spherical in nature and is somewhat flattened in the anteroposterior area . Each globe resides within a skeletal cavity referred to as the bony orbit, which provides superior, inferior, medial and lateral protection to the globe. The globe is positioned anteriorly within the bony orbit and only occupies one-fifth of the cavity. The remaining volume is filled with vessels, nerves, orbital fat, connective tissue and muscles .

The Anatomy of Human Globe

The human globe has a sagittal diameter of approximately 24 mm . The exterior spherical layer of the globe is comprised of an anterior translucent portion, the cornea, and a posterior opaque portion, the sclera . Internal to the sclera is the pigmented portion of the globe referred to as the uveal tract, which is comprised of the following continuous tissues: choroid, ciliary body, and iris. The smooth muscles of the ciliary body, located just posterior to the sclera, regulate the tension applied on the ocular lens and are involved in adjusting the focus of the eye. The iris is a circular structure comprised of smooth muscle, allowing for the regulation of the pupillary aperture (Figure 1).

The iris and ocular lens divide the globe into three chambers: the vitreous chamber, the posterior chamber and the anterior chamber. The vitreous chamber, which lies posterior to the ocular lens, is the largest of the three and filled with vitreous humour, a clear gel-like substance that makes up about two-thirds of the volume of the globe. The posterior and anterior chambers are the areas sectioned off by the ocular lens and iris, and the iris and cornea, respectively. Each of the chambers are filled with aqueous humour, a clear liquid produced in the ciliary body. The main function of the globe and its structures is to form a quality image on a functional retina, where the image is then processed and transported to the brain for additional visual processing via the optic nerve .

The sclera makes up 93% of the outer coat of the globe and is comprised of densely packed collagen fibers twisted into bundles called lamellae. The highly variable interlacing nature of the fibrils increases light scattering, giving the sclera its white opaque color, seen with the naked eye. The strength and inelasticity of the woven lamellae maintains the intraocular pressure of the globe by counteracting the pull of the
extraocular muscles . The opaque nature of the sclera guarantees that light only enters the globe through the pupil .
The external surface layer of the sclera, the episcleral lamina, is comprised of loose fibro-vascular tissue, containing a small number of blood vessels. The blood vessels do not penetrate the sclera and instead travel along the exterior of the sclera, ending in the episcleral lamina . These are the blood vessels effected in “blood-shot” eyes .

The retina, or nervous coat, is the innermost layer of the globe located between the choroid and the vitreous body . It is a thin transparent membrane composed of ten layers and has a purplish-red color in living individuals due to its vascular nature . The blood vessels of the retina originate in the optic disc and their pattern can be visualized when viewed with an opthalmoscope .
Layer one of the retina is the outermost layer and is referred to as the retinal pigment epithelium (RPE) as it contains cuboidal pigment cells; the remaining nine layers form the neural retina and develop from the optic disc . The light sensitive photoreceptors in the RPE translate the inverted optical image to neural activity, allowing photoreceptors (rods and cones) in layer two to form an image via photochemical transduction .

Pupil
The pupil, located just nasally and inferior to the center of the iris, visually resembles a black hole due to the reflected and refracted light from the retina, lens and cornea . The pupil is an aperture, regulating the amount of light that enters the globe and strikes the retina. The diameter varies with age and light intensity, ranging from 2 mm when maximally constricted (miosis) to 8 mm when maximally dilated (mydriasis).
The change in diameter is often a reflex to the light intensity, however, the diameter can change when viewing objects at varying distances, painful stimuli, and under other conditions such as the influence of drugs . In bright light, photoreceptors of the retina such as rods and cones, are activated and the sphincter pupillae, a smooth muscle, undergoes parasympathetic contraction, constricting the pupil diameter . Conversely, in darkness, the parasympathetic stimulation of the sphincter is reduced and the dilator pupillae, a smooth muscle, is sympathetically stimulated, increasing the pupil diameter .

Vitreous humour is a clear substance comprised almost entirely of water (99%) and except for a liquid portion towards the center, has a gel-like consistency throughout the chamber . The remaining 1% of vitreous humour is comprised of hyaluronan and loose collagen fibrils . Liquid vitreous humour does not develop in an individual until the first four or five years after birth .

The iris is a small (11 mm) circular diaphragm almost centrally located around the pupil, between the cornea and lens, and is divided into two chambers filled with aqueous humour: an anterior chamber between the cornea and iris, and a posterior chamber between the iris and the lens . The iris contains a posterior double epithelium layer, which is heavily pigmented and efficient at light stoppage, ensuring that light only enters the retina through the pupil .
From anterior to posterior, the iris is divided into three areas: the anterior border layer, stroma and epithelial layers . The anterior border is a layer of the stroma that contains a larger number of fibroblasts compared to the stroma, as well as a layer of melanocytes 4. The stroma is composed of melanocytes, fibroblasts, and a loose collagenous matrix, and contains vessels and nerves . There is no elastic tissue in the
stroma, however, it is suggested that the transfer of fluid between the intercellular spaces of the iris and the anterior chamber play a role in the significant thickness changes that arise during iris movement (contraction and dilation) . The sphincter pupillae is located in the stroma near the pupillary rim . The epithelial layers are heavily pigmented and contain the dilator pupillae .
The anterior surface of the iris can be divided into two concentric zones: the pupillary zone, which is the smaller, innermost zone containing the sphincter pupillae, and the larger ciliary zone (Figure 2). The two zones are separated by the collarette, an irregular concentric jagged pattern, which is also the area of attachment of the pupillary membrane in the fetus . In addition to the collarette, the anterior surface contains other characteristics such as crypts of Fuch’s, pigment spots, trabeculae in the stroma, contraction furrows, ruff, and ectropion uvae . Trabeculae are most evident closest to the collarette and are bands of connective tissue that appear as radial streaks encircling crypts, or openings observed on the surface . Contraction furrows, an artifact of iris folding during pupil dilation, are concentric in nature and appear as dark lines in the iris . The pigmented posterior epithelium, which has radial folds, briefly continues anteriorly around the pupil, causing a scalloped pupillary boundary .
Ectropion uvae is a condition that occurs when the epithelium extends too far around the pupil and can indicate health, issues which may lead to irregular traction on the iris .

Figure 2. Anterior view of the iris. The image illustrates the individualizing characteristics of a human iris under white light. Source: Wikimedia Commons

The color of the iris is determined by the reflection and absorption of the connective tissue as well as the pigment concentration in the anterior border layer and stroma . The absence of pigmentation in the stroma results in a light blue iris color due to diffraction and is often seen in Caucasian infants, as pigmentation has not fully developed . The longer wavelengths of light are absorbed by the stroma while the shorter blue wavelengths of light pass through to the pigmented epithelium and are reflected back . Pigmentation development is dependent on the sympathetic innervation of melanocytes within the first year of birth. If the melanocytes are not innervated, the iris will remain blue . Brown colored irises, which are a genetically dominant trait, have a significant number of melanocytes and appear dark and velvety . Albinos have pink colored irises due to the color of hemoglobin in the blood, as there is no pigmentation in the stroma or epithelium .

Morphological development of the globe begins just 29 days postovulation and by 32 days the optic vessels have began to form . The iris, however, does not begin developing until the third month of gestation . The individualizing textural patterns of the iris fully develop in the eighth month of gestation, although the color of the iris is not fully developed until a year after birth .