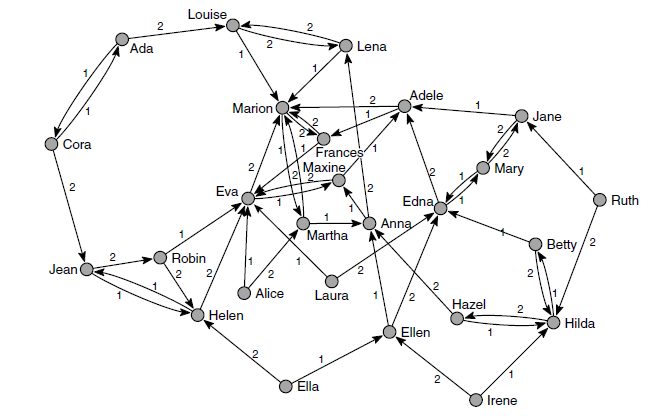 complex multidimensional graph. An example of a sociogram can be seen in Figure 1, which is from the book `Exploratory Social Network Analysis’ Figure 1 depicts the best choice of dining table partners. Each node of the graph points to a person/actor. The relationship between two actors need not be reciprocative and hence could be directed or undirected. A directed line is called an arc whereas an undirected line is an edge. Social network analysis of graph represented by the Figure 1 could lead to answers to questions such as who is the most/least popular dining partner? etc. This explains social network analysis in its simplest form. This is a key to understand the societal behavior.
A social network can be of many different types based on the relationship attribute. The different types of relationships possible are network on social networking sites, communication network (such as email), citation network, collaboration network, product co-purchasing network, road network, peer to peer network, online review network etc. All the above examples describe connection among people but each relationship is of different nature. Unlike Wireless Sensor Network, where connectivity between two sensor nodes depends on the communication range of a sensor node, social network formation purely depends on the relationship attribute.

On the other hand, there are undirected social networks such as collaboration network, Facebook friend network. Though availability of super-fast computers paves a way to study networks of huge size, the number of users of a social networking website is growing enormously and there is a need to study the social networks. The need to study online social networks comes out of its applications. It is widely used in issues pertaining to national security such as, for intelligence/counter-intelligence to combat terrorism, analysis of call detail records to study the relationship of suspects etc.
A collaboration network is formed on the basis of scientic collaboration between authors of scientic journals submitted to a forum on a particular category. Each author is considered as a node and if an author i co-authored a paper with another author j then, the graph contains an undirected edge between two authors `i’ and `j’. E-mail communication covers all the email communication of a particular organization. Nodes of the network are the email addresses and an e-mail sent from one node to another denotes the edge. Also, in the eld of medicine, it is applied for protein-protein interaction, spread of infectious diseases such as AIDS etc. The enormous growth of social networks and its signicant applications has resulted in surge of interest in researching the structural and behavioral properties.
Typically the information collected by using WEB crawler software leaves us with improper or inaccurate information. Thus there is immense signicance in being able to extract the missing information from available data.