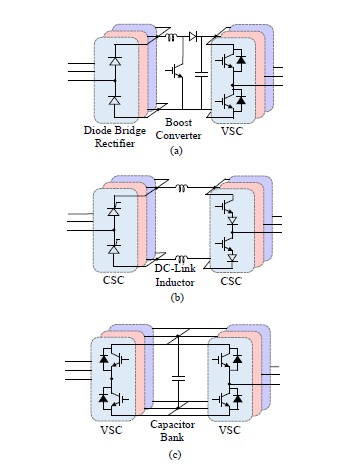 The most common two-level power converter topologies used for three-phase power transfer are presented in Figure 1. Figure 1(a) presents a topology with a threephase diode bridge rectifier as the generator side converter which is cascaded with a boost dc-dc converter . These converters rectify the generator voltage and boost it to the desired dc-bus voltage. The dc-bus formed by electrolytic capacitors is then connected to a three-phase two-level VSC. The drawbacks of this converter topol-ogy is the distortion of the generator output current that results in the low-frequency torque pulsations at the generator shaft . Furthermore, the dc-bus is formed using electrolytic capacitors, which are the most failure prone component for any power converter . The next commonly used back-to-back converter topology used in wind energy conversion systems is shown in Figure 1(b). This topology is formed by a cascaded connection of Current Source Converters (CSCs), connected through dc-link inductors. This topology helps to eliminate the failure prone dc-bus capacitors but introduces another component, i.e. the dc-link inductors, which are bulky and contribute to losses in the system, reducing the overall system efficiency. The most commonly used two level back-to-back converter topology is presented in Figure 1(c). This topology is formed by a back-to-back connection of VSCs and electrolytic capacitors at the common dc-bus. This topology helps to eliminate the low-frequency torque pulsations at the generator shaft but still has the failure prone component. The topologies discussed so far are two-level power converters and when used for MW range of power conversion cause very high

stress at the generator and transformer, and would require bulky filters in order to reduce this high

stress on the IGBTs and further aids in the reduction of the size of the output filter. Even though it is a very commonly used topology, the frequently failing capacitor bank still exists in this topology and its failure rate is high due to midpoint voltage fluctuation at the diode clamp . Another commonly used topology is the three-phase three-level H-bridge back-to-back converters shown in Figure 2(b).