The study of social unrests in modern context was initiated by 1960s. Before that, just a few historians had shown any inclination to follow the issue of civil disorder and social unrests. Frank Ongley Darvall is an exception. As a member of Britain Liberal Party and a scholar of international politics, he wrote a few essays about social unrest. In his famous book published by 1934 (Darvall 1934), he studied popular disturbance in England between 1811 and 1817 and criticized the reaction of public authorities to the unrest. Robert Featherstone Wearmouth is another historian who was interested in the topic of social unrest. He focused his research on worker class and social movements caused by workers‟ dissatisfaction (Wearmouth 1957). However, these pioneer historians failed to make social unrest study as a sub category of social science. What we call social  unrest or civil disorder in political context can loosely be defined as some forms of accumulation of discontent in social classes or groups of people. In the lack of any widely accepted definition, one of the oldest encyclopedias in political science, Cyclopedia of Political Science, defines social unrest as execution of law by public force against rebels will (Lalor 1881). According to Lalor, disobedience to legal authorities is the key element in civil disorder. Britannica encyclopedia  entions  social unrest as a condition of social community in which outbursts of violence is very likely. Social unrests happen anywhere, regardless of ruling government. It might happen in North America, France, Greece, and Arab nations in any form of military or peaceful demonstrations. John Graham Brooks studied, in his famous book “The Social Unrest” published in
1903, the term from a historical perspective, but showed no interest in prediction. He said, “The interpretation of unrest varies with the mood of writer”, focusing on the fact that meaning of unrestis changing in history (Brooks 1903). He discovered social  unrest root in modern lifestyle without associating unrest with tradition and oriental life. “Early human is fairly satisfied with his life”, he said.
A more recent research in social unrest considers the phenomena as a form of collective dynamics behavior of individuals in the society (Braha 2012). From this perspective, graph theory and network science come to play a role in modeling processes. There are fundamental questions remaining unanswered in this area: What exactly causes social unrest? How can we predict
consequences of a social unrest in terms of risk, duration, expected damages and controlling factors? OECD report (Aleksandar S. Jovanović 2012) takes social unrests as mainly a social risk and hazardous condition. On the other hand, a few other studies consider social unrest as an inevitable part of social reforms (Chossudovsky 1997). Prevalence of online social networks during the last few years has significantly affected emergence of social unrest (Tufekci and Freelon 2013) and has made the predictions even more complex. At the same time, social media trends and data can feed prediction models. For example, Campton showed how a prediction model can be built using raw Twitter data (Compton, et al. 2013). 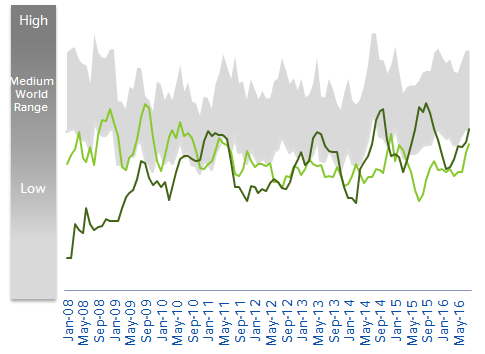