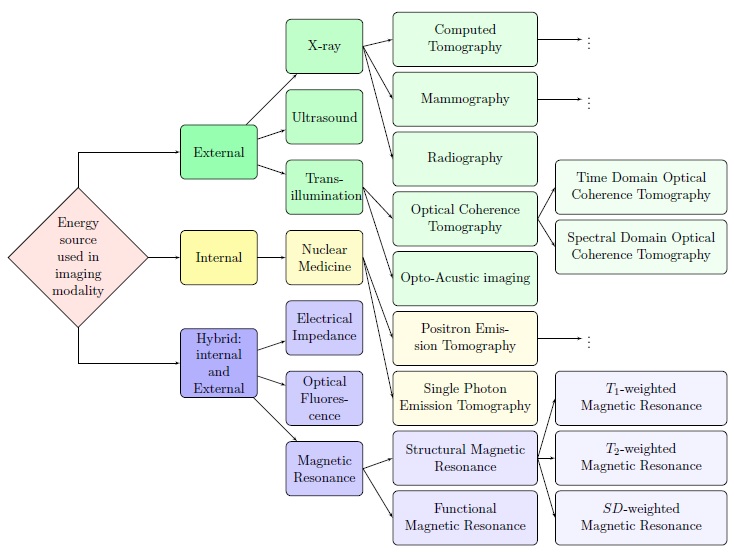 Over the last decade, medical image computing and analysis has evolved into one of the most important fields within the biomedical imaging community . This is largely attributed to the rapid progress in computerized medical image visualization, advances in analysis methods and computer-aided diagnosis. Medical images must be accurately acquired prior to the analysis stage, and nowadays a vast array of diagnostic medical imaging modalities is used to examine the human body. Interpretation of the subsequent images requires advanced image processing methods that enhance visual understanding, and image analysis methods that provide automated feature extraction, measurement and classification.

In a general setting, many different processing steps are required in order to extract the data of interest from a medical image, and a general hierarchy in the processing steps becomes evident. For example, image enhancement usually precede image restoration, which will precede analysis, feature extraction, registration and classification. However, before any processing and analysis can take place, images must first be acquired, and thus we focus on image acquisition in the following section.

As mentioned previously, today, there exists a vast array of medical imaging modalities, and different flavours of these modalities and we shall make no attempt to try and make an exhaustive list of them all. In general, imaging modalities that are available today can be classified into one of the following three categories; imaging methods employing (1) internal (2) external or (3) a combination of intern and external energy sources. In commonly employed external energy source methods, ionized radiation is used penetrate tissue and measure the attenuation coefficient of radiation passing through the body. In internal source methods radioactive pharmaceuticals are injected into the body to interact with tissue and form an internal source of radioactive energy that is used for emission-based imaging. Hybrid modalities employ a combination of internal and external energy sources.
For example, MR images use external magnetic energy to stimulate hydrogen protons in the body. These exited protons become an internal source of energy and provide electromagnetic signals that MR scanners can detect. Other types of biomedical imaging modalities are listed in Fig. 1. Since this thesis focuses on primarily two imaging modalities, Magnetic Resonance and Optical Coherence Tomography, we briefly describe these two modalities in the following subsections.

Structural magnetic resonance imaging employs the principles of Nuclear Magnetic Resonance (NMR) to provide high contrast and high resolution images of the human body. NMR principle is based on quantum properties of nuclei and protons – the spinlattice relaxation time

and spin density ρ. In their natural state, the spin of the protons in the human has no orientation, however, when placed in a high-strength external magnetic field, the protons become aligned with the magnetic field. Radio frequency (RF) pulses, operating at the resonant frequency of the protons, are used to flip the spin of the magnetically-aligned protons, which eventually decay to their natural spin state when the RF plus is turned off. The decay of a proton’s spin is characterized by emission of photons, at a rate that is proportional to the relaxation time. In the context of NMR, different soft tissue is characterized by the different relaxation times T1, T2 and the spin density, and thus by measuring the time constants T1 and T2, we can differentiate between the various types of soft tissue found in the body (i.e., gray matter, white matter, CSF). By using a relatively small gradient in the induced magnetic field, also known as the ‘slice-selection gradient,’ the protons in the same types of tissue are forced to relax at slightly different rates, which allows spatial information to be recovered from the collected data. It is important to mention that the raw MR image samples are acquired in the frequency domain, and the spatial domain image is obtained by taking an inverse weighted multi-dimensional Fourier transform of the collected data.

Optical Coherence Tomography (OCT) operates under completely different physical principles compared to MR imaging, and, as can be seen from Fig. 1, comes in several different ‘flavours’. Fourier Domain Optical Coherence Tomography or FD-OCT works similarly to ultrasound, however substituting use of near-infrared light waves instead of sound waves to reconstruct images of tissue layers based on the reflection of light from tissue interfaces. By using the time-delay, and/or magnitude variance information contained in the light waves, which have been reflected from different depths inside a tissue sample, an OCT system can reconstruct a depth-profile of the sample structure. Three-dimensional images can then be created by scanning the light beam laterally across the sample surface to create a submicrometer 3D tomographic grid.