The Internet of Things (IoT)

The Internet of Things (IoT)

The Internet of Things (IoT) is a network of devices, or things, connected to the Internet that can communicate their status, respond to events or even act autonomously. The IoT devices discussed in this thesis consist of sensors and actuators capable of transmitting their collected data via Bluetooth Low Energy. These devices are limited in power, processing and storage. The network topology connecting these devices varies but here we will remain focus on implementing a mesh topology. This is an ad-hoc network infrastructure where the nodes communicate directly with each other without the need to pass through a central structure such as an ISP [IoT Guide].

The main role of the IoT device is to periodically sample real world data. This data can be transmitted to other devices for actions such as decisions and storage. Through the use of sensors and actuators, the IoT connects digital devices and everyday objects, bringing the connectivity of the Internet into the physical world. Some of the “things” devices can include sensors for recording the physiological measurements of humans [Miorandi et al. 2012]. So as the things environment becomes more complex the need for a reliable connection to the Internet either directly or via gateway devices becomes increasingly important. 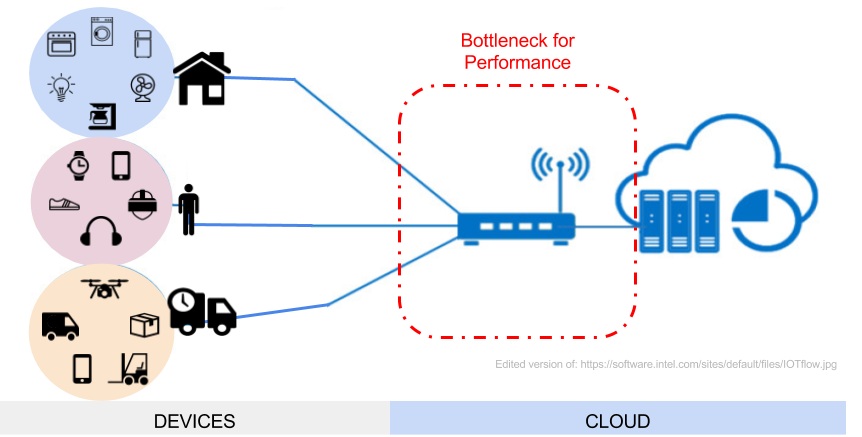 Figure 1: This shows the general layout between things (left) their gateway device (center) and the cloud (right). As new networks become available for the things, their bandwidth will increase, forcing pressure on the network between the gateway and cloud. This trend towards congestion continues as varieties of sensors and devices are developed with the intention of increasing the understanding of the environment where they are deployed.

Such a gateway device can be considered to occupy the edge of the network. It is the first device in the chain from thing to cloud. The device acting as a gateway is called an edge device. This device places applications, data and processing at the logical extremes of a network rather than centralizing them. Placing data and data-intensive applications at the edge reduces the volume and distance that data must be moved . However, an edge device, such as a smartphone, may have constrained resources such as limited battery life, storage, and/or computational power. This limited functionality may require processing work to be offloaded to external resources.

The role of IoT in Smart Communities and Smart Cities

If the edge device (named edge for its existence at the end of a network) relies heavily on external resources such as the cloud, it can put a huge stress on the network resulting in bottlenecks leading to and from the cloud [Cisco, 2015]. This trend towards congestion continues as varieties of sensors and devices are developed with the intention of increasing the understanding of the environment where they are deployed. This continuously floods cloud data centers at a rapid rate creating a need for the cloud to move closer to the device. Therefore, the paradigm of fog computing is increasingly identified as a useful tool to establish remote intelligence in the context of IoT. In this thesis we discuss the recent development of a fog gateway and its role in orchestrating the process of data acquisition, conditioning, analysis, and storage. In particular the aim is to identify a way to reduce data transfer bottlenecks by pushing machine learning capabilities away from the cloud and closer to the things.

This master thesis research focuses on finding a balance in performance on devices within the local network and the cloud, while reducing the transfer of data to the cloud. The primary role of the fog gateway is to reduce the amount of, and reliance on, data sent to the cloud by orchestrating the process of data acquisition, conditioning, analysis, and short-term storage. The IoT devices are expected to collect and clean the data, as well as adapt to the information passed back from the fog gateway or another IoT device itself. While the cloud plays a vital role in the ecosystem overall, it is not widely researched in this master thesis. More emphasis was given to the fog computing and its performance analysis. This fog concept coined by CISCO aims to minimize latency, conserve bandwidth, improve security, maintain reliability, and move data to the best place for processing [Cisco], thereby creating a greater reliance on the local network to function.

Figure 2: The thing to cloud continuum: Devices with limited functionality, computational power
and resources appear at the bottom. These devices exist and interact with a small number of
other “things”, and typically in a usual context. Contexts such as home monitoring, personal
health and entertainment, asset delivery, and product manufacturing are just a few examples. The
fog aims to connect contexts with mutual interests into smart communities. This broader, but still
local network creates the fog environment that can deliver the most contextually relevant data to
the cloud.

The performance of the described fog architecture is evaluated on several fog testbeds including the Intel Edison, Raspberry Pi and Intel NUC. They will run through an experiment use case for a telemedicine facility that could analyze the motion of the patients. The results demonstrate that the fog gateway provides a way to improve the interactions among the general purpose sensing devices, smartphones, and the cloud. In particular, the focus is to evaluate the timing, CPU load, memory load, and network measurements throughout each stage of the cloud-to-things continuum.