The first electric car is considered to be invented by Scotsman Robert Anderson, somewhere in-between 1832 and 1839. Unfortunately, the exact date is unknown and the detail design was lost. In the same time, Sibrandus Stratingh, a Dutch chemistry professor, also carried out a breakthrough in inventing electric horseless carriages. 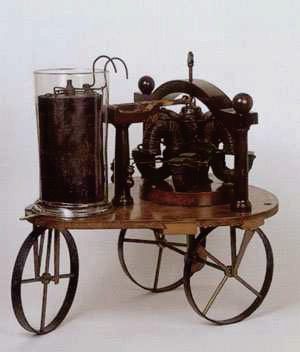 Figure 1: First Electric horseless Carriage, by Sibrandus Stratingh. It was simply a wooden platform carrying a battery and a motor. Now it is on display at the Museum Boerhaave in Netherlands.

The first electric carriages were nothing but some fancy oddity, due to the backward battery technology. The carriage weighted about 6.6 lb and could carry loads of half of its own weight. It was powered by a primeval battery consisting a zinc plate and a copper plate sitting in a jar filled with dilute acid.
The battery could provide fifteen minutes driving time before the current was exhausted. Thanks to the invention of lead-acid rechargeable battery in 1859, the electric vehicles (EVs) became more practical. In 1881, the first electric vehicle powered by rechargeable batteries was demonstrated at the International Exhibition of Electricity in Paris. Using the updated battery technology, the electric vehicle reached a top speed up to around 10 miles per hour and the range of driving was extended to around 25 miles at the dawn of the 20th century.
At that time, the major rivals of the electric vehicles were the traditional horse carriages and the cars powered by steam or internal combustion engines (ICEs). Although the horse-drawn carriages were more dependable and sturdy, the accumulation of horse manure was a serious problem of towns. For a steam power car, the driver needed a long time to light up the loco and build the pressure, comparing to which, charging EV overnight became a minor inconvenience. The gasoline internal combustion engine vehicles, at its birth in 1985, also had it defects including difficult to start, and the need of a complex gearbox which is hard to maintain. On the other hand, electric cars has no emissions nor noise, drives easily and smoothly, and lower cost of upkeep. The limited range of electric cars did not seem to be a great issue since the journey of early mobiles took place in built-up areas, which were limited in 19th century.
In the golden time of electric vehicles from 1900 to 1910, the market share of EVs in the United States achieved almost 40%, comparing to 22% market share of gasoline cars. EVs were running elegantly without noise and pollutants, and became popular with wealthy people. Even the Royalty became a fan and enjoyed the driving. Other urban residents could experience it by taking an electric cab, which had been proved a great success in America. Facing the high demand of electric cars, the manufacturers were working on the biggest drawback of the electric vehicles, the limited range. By 1903, Thomas Edison created a nickel-iron battery for transport applications. The new battery could supply energy for EVs to travel over 45 miles. In the same time, Ferdinand Porsche, the founder of the Porsche, created the first hybrid vehicle, the Semper vivus. The vehicle was powered by a battery and two combustion engines and the maximum speed reached 25 miles per hour.

Figure 2: Queen Alexandra’s electric car for driving around the grounds of Sandringham House.

However, gasoline vehicles went from strength to strength and turned against electrics. The Kettering electric starter made the internal combustion vehicle as convenient as EVs. Henry Ford and his model T made gasoline cars widely available and affordable. The wide driving range and the cheap price made half of all the cars in the US to be model T by 1918. Meanwhile, better roads and new discovered crude oil reserves helped contribute to the disappearing of EVs in 1935. Over the next 30 years or so, cheap abundant gasoline and continued improvement in the internal combustion engine created little need for alternative fuel vehicles. In 1960s and 1970s, the soaring gas price brought EVs back into the public consciousness temporarily. Sebring Vanguard’s CitiCar was one successful example. The wedge-shaped compact car with 50-60 miles driving range made the company the sixth largest U.S. auto maker by 1975. But the limited performance and driving range caused interest in EVs to fade again.
In the 1990s, new federal and state regulations created a renewed interest in EVs. Automakers began modifying popular vehicle models into electric vehicles while improving the performance and range. In 2000, Toyota released the Prius, the first mass-produced hybrid vehicle, worldwide. It became an instant success. The sale of Prius in 2015 achieved 18,000. In 2006, Tesla Motors announced plans of building a luxury electric sports car with a range of 200+ miles. Now three production lines of EVs are available, with a driving range more than 250 miles. In 2010, GM released the Chevy Volt with battery technology developed by the Department of Energy (DoE). In the same year, Nissan released the LEAF, the most popular EV model on the road by 2016.
There are typically three types of electric vehicles, plug-in EVs (PEVs), hybrid EVs and plug-in hybrid EVs (PHEVs). In a plug-in EV, the electric motor is powered by battery packs which are rechargeable by any external source of

electricity, such as wall sockets. A hybrid electric vehicle, however, combines internal combustion engines with the electric motor. The ICE is used to charge the battery when the capacity is low or directly delivers power to the wheels when it is needed. Specially, a plug-in hybrid EV (PHEVs) combines the advantages of both EVs, which has internal combustion engine and a battery that can be charged by plugging into the electrical grid.
As of December 2014, the global number of EVs reached over 665,000, which represents 0.08% of total passenger cars. In 2015, total electric drive vehicle sales reaches over 498,000, which is 2.87% of total annual vehicle sales. Norway, Netherlands, Sweden and the US are counturies with most EV adoption. In particular, the market sales shares of EVs reaches over 12% in Norway.
The accumulation in EV market also stimulates the investment in EV charging facilities. Through the end of 2014, there were more than 15,000 fast charging

points and 94,000 slow charging points across the world. EV charging station stock more than doubled for slow charging points between the end of 2012 and 2014, and increased eightfold for fast charging points. As of March 2016, there are more than 12,700 electric stations and 31,800 charging outlets deployed in the United States, most are installed in the east and west coast.
Despite significant growth, current EV adoption is well below President Obama’s call to have 1 million EVs on the road by 2015. Over the long term, however, EVs will likely need to account for a significant share of the vehicle fleet in order for auto makers to achieve the new Corporate Average Fuel Economy standards of 54.5 mpg by 2025, up from current level of 27.5 mpg.