Social unrests can be classified in terms of causes, effects and forms of emergence. John E Archer in his book “Social Unrest and popular protest in England” introduced an overall classification for causes of social unrests: agricultural protests, food riots, industrial protests and political protest are main categories of his work (Archer 2000). A more recent study mentioned ethnic strife, violent conflicts, civil wars, and terrorism as forms of social unrests (Oded Stark 2010). “Freedom in market and ownership can reduce the likelihood of terrorist attacks”, Tim Krieger and Daniel Meierrieks said (Tim Krieger 2011). Poor socio-economic development, poverty and income inequality (Esteban and Ray 2008) are believed to be among root causes of ethnic conflicts as a form of social unrest. Foreign policy of the country is also an important issue in motivating social unrest and being a target for terrorism that causes social conflicts. Besides, demographic condition of the country also makes it less or more vulnerable to social unrests. It has been shown that a large population leading to scarcity of resources is a cause of terrorism and social conflict (Tim Krieger 2011). Economist magazine intelligent unit believes that decline in effective factors like employment do not lead to social unrest necessarily. A few other elements need to be present as incomeinequality, poor government, low levels of social provision, ethnic tensions and a history of unrest. This method of prediction highly depends on very recent social dynamics. For example, in case of Thailand, it has been predicted as a medium risk zone. But very recently in December 2014, a social crisis happened there, and riots have surrounded the prime minister in his house (M.S.L.J. 2013). Economic insecurity is the other dissatisfaction factor. Walter Bossert proposed an index to measure economic discontent. He assumed economic insecurity as “anxiety produced by the exposure to adverse events and the inability to recover from them”. According to him, we can assume that the total relative deprivation (TRD) is the sum of relative deprivation of all individuals of the society. Relative deprivation should be calculated using the following formula: For the person “A”, “x,” is the percentage of the society that earns more money than “A”. “y” is the additional income that they earn more than A. “x” times “y” is relative depravation of the person “A”: (Bossert 2009). The same research proposes “polarization” as another factor. This index simply shows how people feel within group identity in comparison with between group alienation. The more people share the same level of income, the more the feeling of faith to the group increases. The feeling of “between group alienation” is measured by difference in income level of two groups in relation to the average income of the subject group. The calculated value yields the polarization index. Oded Stark and Walter Hyll showed how these factors can be useful in prediction of potential social unrest (Oded Stark 2010). Globalization (Westaway 2012), economic related issues, political crisis, and technology related and environmental issues have raised social unrests. Natural events like the 2011 tsunami in Japan also have been considered as another cause of social unrest. (Aleksandar S. Jovanović 2012). In some cases like India, it has been agrarian reforms to be a major cause of social unrests (Roy 2012). Food price is the other factor which is believed to be a major cause for the recent uprising in Arab‟s nations (Lagi, Bertrand and Bar-Yam 2012). 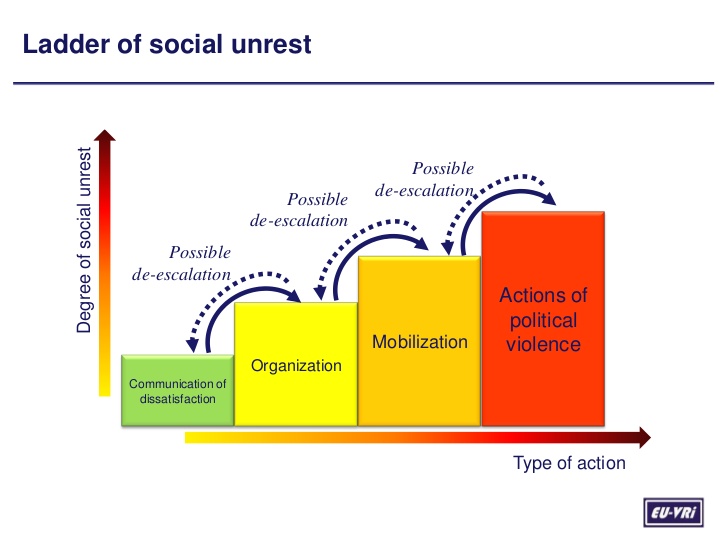